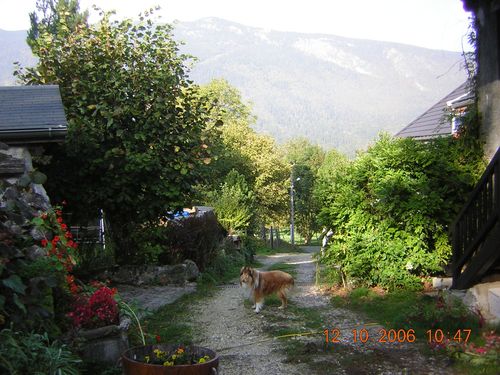 They saw me. And immediately I knew I wanted them to take me with them. And they did! I kept jumping all the time, so they called me Jump.

I was about three-months old. They took me for runs in the forest – so that I’d stop peeing everywhere in the house, they said. Running is fun. But the forest is a dangerous place. They call them “tree stumps” but, for me, Jump, they are frightening monsters.

They used to run races. The first time they all ran and I had to wait for them all day in the car. The following time, I entered the race too! It was the Semnoz Climb. At intervals there was water and food for the runners. And the attendants gave me food and drink too! During that summer we ran in the forest and in the mountains. Nearly every day. I even ran round the Lake on the path that surrounds it on top of the mountain ridge, in two days – 65 km.

In the forest, unfortunately, there are ticks. Dozens of them sucked my blood! On two occasions they made me very ill, I nearly died.

I had several Masters. During the holidays, in turn, they would take me in the country, at the seaside, in the mountains. I loved being in the water, in mountains lakes, with big block of ice round my neck.

One year I found a friend: Minou. A blue eyed Siamese cat. We really had such a good time together! And then I saw him no more… I found a silver tabby cat: Frimousse. I like him very much, even though he doesn’t play like Minou did.

My Masters and I moved into another flat. And Frimousse moved to a house with a garden. And there I found two other friends: Sam, a sort of black leonberger, who likes running too, and Rouxy, a ginger kitten.

And the elder of my little Masters was born. He soon started referring to me as “woof-woof”, because I barked a lot. In June of the same year Rouxy lost a paw. Poor Rouxy! I am so happy when he rubs his fur against mine when he arrives in the morning.

The following year I found another friend: Tigri. He’s so scared of children, Tigri. He has suffered bad treatment from children for sure! He was thrown out of a car into a ravine where Frimousse’s Masters found him. He is happy now. And, I, Jump, like him.

Then the younger of my little Masters was born. He likes me too. I’d like all of them to be with me all the time…

This year Sam can no longer run, and he walks with difficulty. I still enjoy running in forest and in the mountains. I’m a bit slower, of course. Nearly 12-years old!

Now we live in a house with a large garden. It will be great during the holidays!

Snow has fallen at last. I have gone tobogganing with my little Masters… 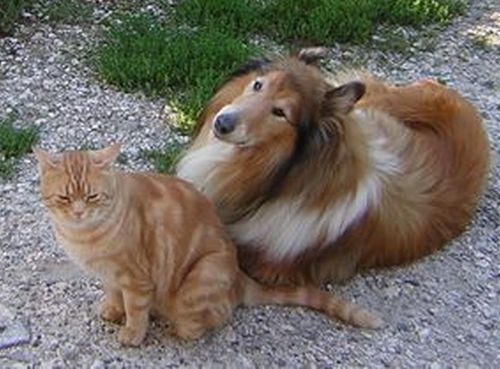