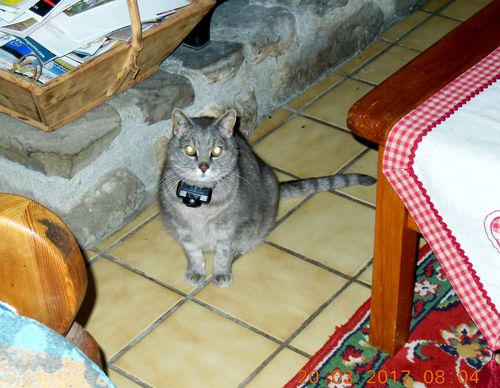 Photo this Monday morning just after 8.

I opened the cat-flap for Frimousse at about 6:30. He prefers his garden to the litter-box by far! Then he stayed lying under the balcony for more than an hour, watching birds, I think. Just before eight he came in to eat and drink. Very little food but better than none. He went out again to the far end of his garden, where he often catches rats. He doesn’t look like a cat at death’s door this morning!

I won’t tell you hour by hour, nor even day by day the end of the life of our sweet Frimousse. There can’t be good news. We hope that he will be with us as long as possible, without suffering.

This week will be difficult. On Wednesdays Frimousse’s doctor doesn’t work at her surgery. On Thursday and Friday we’ll have to leave Frimousse alone in the house for some time. Let’s hope his condition doesn’t deteriorate by Saturday – and then the week-end is another problem…