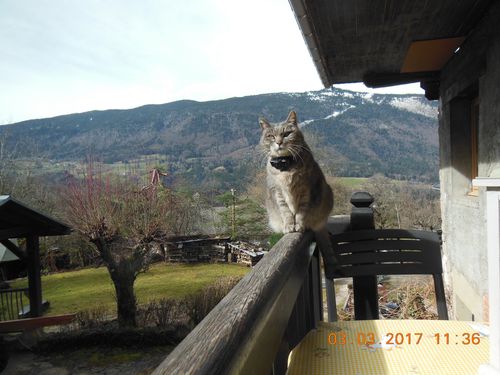 Since RouXy’s death Frimousse has eaten very little. And for two or three days practically not at all. Furthermore he has more and more difficulties in going up the stairs, and yesterday, a nightmare, step by step, with the help of his front paws. Exactly as RouXy did! We were totally disheartened yesterday evening, Frimousse now!

When I got up this morning I feared the worst. First, a look at Frimousses’s dishes: he had practically eaten nothing. I opened the cat flap and Frimousse immediately went round the garden, in a gusty wind. He seemed to adore. Then he went up the stairs to come inside, almost normally. Within half an hour he went in and out four or five times, going up and down the stairs each time. That brightened up our spirit, so we decided to call Frimousse’s doctor for an appointment. 11:30.

Frimousse was captured and put into the transport cage, in the way the French police would do, but with no telescopic truncheon – Frimousse’s Masters are civilized people… The Journey was brightened up by the efforts of King Kong to dismantle the door of the transport box. Finally, friendly welcome by the doctor’s own cats…
She put her ad hoc  gloves and examined Frimousse, in the cage, the top of which we had removed… No blood test because, in the case of Frimousse, an anesthesia would be necessary. Very pink tongue, no anaemia, the heart and the lungs are well, the clinical examination reveals nothing particular. Then?

Then … Frimousse is old. The stairs? Probably a spell of degenerative osteoarthritis. Lack total of appetite? Depressive state due to RouXy’s death – refusal of food is the characteristic sign of the depression of cats.
We thus returned, much more in peace, Frimousse having understood that it was the way home. He ran in the garden, ate just a little and now he is asleep on the bed, while his Mistress is running by the Lake.
Treatment? Nothing. Except talking to him a lot. 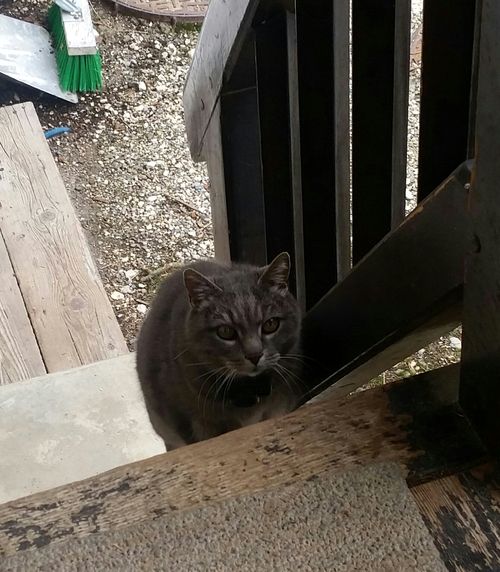