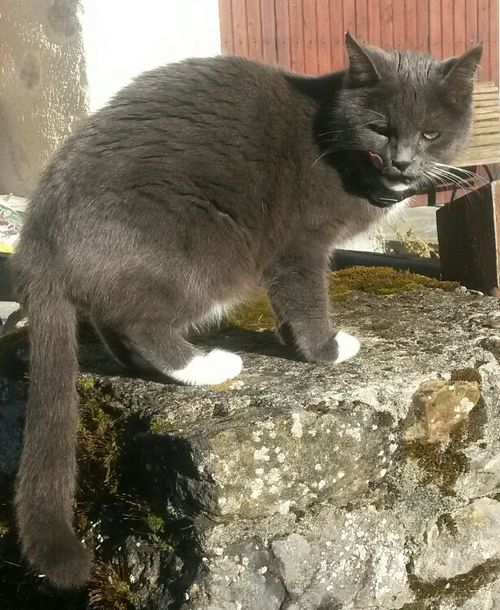 Plume, “Feather” in English, was a very pretty pussy, very agile and very lively. As she was our neighbour’s cat, she was also our part-time cat. Whenever her Masters were away for a week-end or for a month we would take care of Plume – making sure she was inside during the night and unlocking the cat-flap for her in the morning.

She was of a dark grey with a patch of white on her chest and white “gloves” at each paw. She had witty eyes she kept blinking all the time.

A few weeks ago she started losing weight and during the past few days she practically stopped eating. But she was still very lively and her Masters thought it was a temporary disorder. As she was out in her garden all day, she practically never went in her litter in the house, and her Masters could not notice if she peed a lot.

Yesterday at 4 her Mistress took her to the vet. The urea level in her blood was so high the machine couldn’t show! Nothing could be done except keeping her alive at the vet’s clinic for a few days. Her Mistress rightly decided that it was in Plume’s interest to put her to sleep.

Plume was buried in her garden in a place she enjoyed to be. She was only 8 years old.

5 thoughts on “Our part-time pussy”