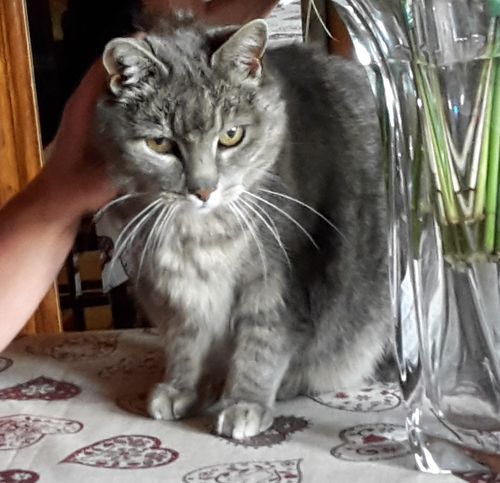 Yesterday morning I, Frimousse, knew immediately there was something going on. Therefore I remained at the far end of my garden, behind the raspberry bushes. My Masters became nervous. When RouXy arrived I didn’t get into the house to share breakfast with him. It became clear I wouldn’t get into the house. My Mistress treacherously came to me pretending to stroke me and she abruptly got hold of me. I screamed but she managed to carry me inside.

It was the day of the celebration of my Master’s grand-sons’birthdays, respectively 12 and 14 years old.

Off they went. They only came back just before 8 in the evening. RouXy was taken to his house and I, Frimousse, was let out in my garden, my Masters hoping I wouldn’t stay out until midnight! They were glad I didn’t. I went in after a half-hour in the garden.

I had my dinner and as my Masters were sitting at table, discussing, I joined them and asked my Mistress to stroke me.

2 thoughts on “No hard feelings?”