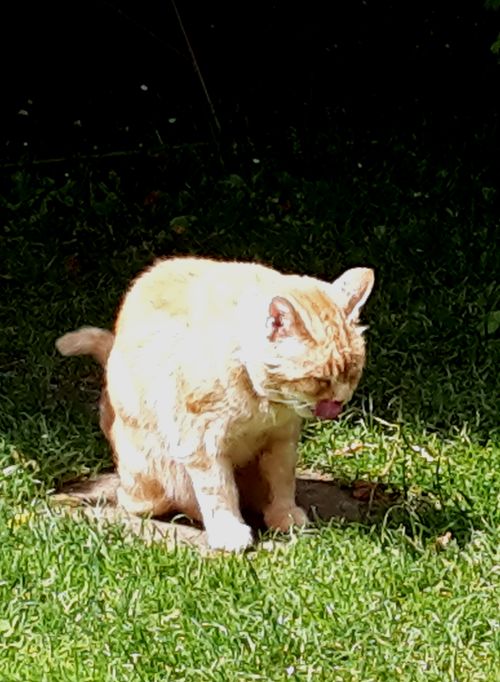 I, RouXy, two days ago, after finishing lapping my daily fromage frais

June 6th 2008 was a Friday. Next morning, Frimousse’s Masters told me that the previous night, around 9, my friend Frimousse had started running after his tail, biting it, spinning round under the table and under the chairs. He was growling as if he was going mad. His Maters were frightened, and so was Tigri. Two hours later they decided to phone the vet on duty. Fortunately, our doctor was the vet on duty! She said to bring Frimousse first thing in the morning so that she could examine him.

At that time, I, RouXy, would go to Frimousse’s house rather early. My Master used to open the trapdoor of my cellar when it was time to go and take care of the hens. As soon as I arrived at Frimousse’s, the cat flap was locked so that I, RouXy, and our friend Tigri, would be safe in the house, Frimousse was put into the transport box, not without difficulty, and off they went to Annecy.

A month later, when Frimousse was taken back to our doctor’s, she said that it was not a brain tumor, or something similar, but it was a behavioural disorder. And my friend Frimousse has been living for 8 years with that disorder, with ups and downs, periods without crises and periods with frequent crises. But never as violent as that of June 6th 2008.

Frimousse’s master was worried about the future. Therefore, on July 7th 2016, he created le Blog de Frimousse   (in French only) so that Frimousse could speak about his life, and also my life and those of Tigri and Plume, who sadly are not here anymore.