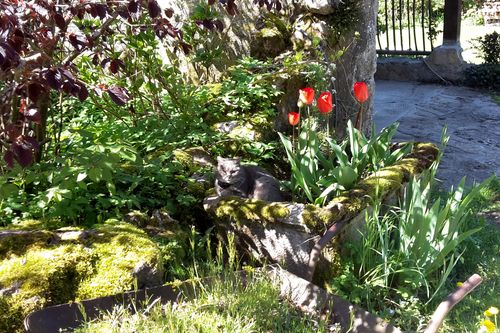 On Wednesday, late in the afternoon – it was well passed six o’clock – my Master was recovering under my lime tree, after a hard day’s work. In the morning the chimney sweep had come and my Master had had to transport a good stere of wood to let do his job. And in the afternoon, a thing that had been postponed for too long, he dug some square-meters so that my Mistress can sow French beans and plant courgettes. Obviously his health problems were not over yet but you can imagine the state of his knees … And suddenly, hurtling down the path at full speed, arrives in whirlwind a cyclist, helmeted, fully-equipped, the elder of the Jump’s young-Masters! He had left his home alone to visit us on his state-of-the-art bike, climbed Semnoz (1700 m, 1st category for the Tour de France riders)! As it was late my Masters suggested he should stay with us for the night or that they take him back home in the car. ” No, no, I shall be home before night! “ And he actually did! His mom informing us of his safe return said she was “impressed”. And so were my Masters, 80km with a high pass, and he’ll be 14 in June, Mouneluna will appreciate….

And I, Frimousse, I go on with my cat’s life, with my friend RouXy, under the attentive eyes of my Masters, who have to take care of Plume at the moment. My Mistress takes her in in the evening and that takes a long time because Plume requires many caresses before spending the night alone in her large house.