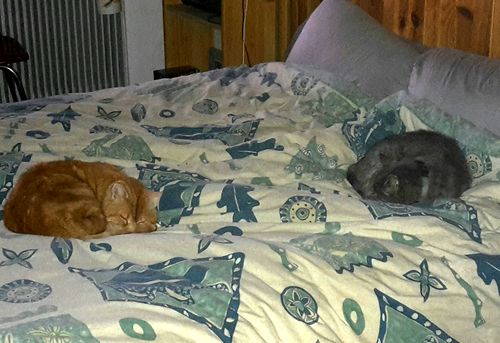 In the morning, RouXy will arrive at our door around 10. He never uses the cat-flap but always scratches at the door – meaning “I’m here!”. When he is inside, he pushes his head against mine for me to lick his forehead. Then we eat what my Master has put in our dishes. After having made sure that both dishes are clean, RouXy jumps on the table of the dining-room and asks for his milk and his fromage frais or yoghurt.

And out he goes, through the cat-flap if my Master has been too slow to open the door for him. Will he try to go down to the road, or up to his Masters’ courtyard or garden or barn? Anyway my Master tries to keep an eye on RouXy. He’ll eventually check there are “granulés” – that’s the word his Master uses referring to RouXy’s food – in his bowl in the kitchen of his house – no cat-flap, my Master is the doorman…And then… And then the day is an incessant back and forth between his house and ours and the surroundings. He’s incredibly fast for a three-legged cat. In a matter of seconds he can move from the top of courtyard of his house to the side of road, 100 meters away, particularly if he thinks he can do it unnoticed. But it all depends on his mood, on the weather, on my Master… Some day he will spend hours sleeping on the sofa in his Masters’ living-room, and some day he will sleep with me on the bed of our friends’ bedroom or alone on one of the sofas upstairs.

At the end of the afternoon he is usually in my garden waiting for my Master to ask us to come in. Very often this happens when the sun sets and hides behind the mountain. It can be before 4 o’clock in the mid of December and well after 8 in the heat of the summer. We have ‘dinner’ together and settle on a sofa or an arm-chair upstairs in my house.

He’ll eventually be taken to his between 7 and 7:30 in the ‘dark’ season and when it’s dark, in the summer. RouXy will watch television lying on the sofa against his Master and when the program is finished his Master will open the trapdoor for RouXy to go and spend the night in the cellar – it’s been his bedroom for over 14 years now.